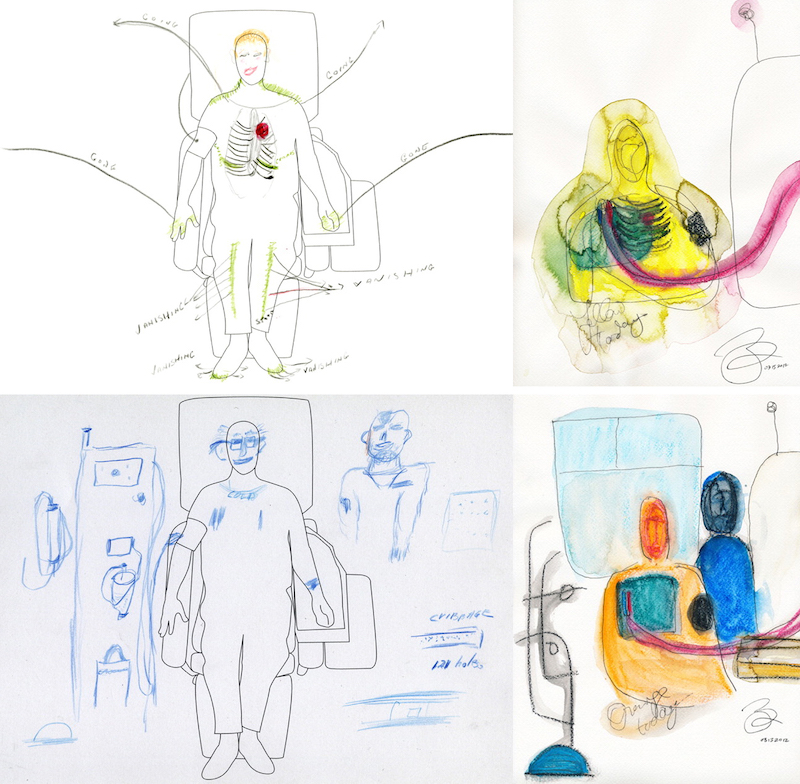 From 2006 until 2010, I volunteered in the geriatric unit at Toronto Rehabilitation Institute (University Health Network). Once a week, I met with a diverse inpatient population of older people (aged 65+) who were recovering from a recent surgical procedure. More than half of the patients attended two-hour haemodialysis therapy appointments 6 days per week. When I asked them what they do while they are on dialysis, patients often responded by saying, “Nothing, it’s boring.”  It was this experience that led me to my interest in arts-based approaches to health and illness.

In 2010, I enrolled in the Master of Arts program in the Department of Health, Aging and Society at McMaster University full time. Building on my experience in the geriatric unit, I was interested in understanding social isolation and the mental health effects that older adults often experience as inpatients. With a supportive committee, I studied how an intervention known as “body mapping” can help with describing, reporting, and monitoring experiences of haemodialysis while patients were in the dialysis unit at Toronto Rehab. Body mapping is a visual, participatory, therapeutic arts research method that involves having one’s body traced, then drawing and writing about any cognitive, emotional, or physical experiences, in and around the body map (de Jager, Tewson, Ludlow, & Boydell, 2016). Throughout this work, I witnessed how the process of body mapping, and conversations about their experiences made an impact.

At the end of my study, I created watercolour sketches as ‘visual memos’ to reflect on a few encounters that I had with patients in the unit. Such techniques extended beyond the usual requirements of written memos and grounded theory analysis that are a part of research. In doing so, the process of visual memoing has become a way for me to think critically, and reflexively about the people I meet as a researcher. As a qualitative researcher, written memos are critical for keeping track of thoughts and ideas after an encounter with a participant. Yet, based on my experience, and positionality as an artist and a social scientist, I would advocate that visual memos become a part of visual methods and an engaged critical reflexive practice.

Read more about this work in, “Witnessing: Creating Visual Research Memos About Patient Experiences of Body Mapping in a Dialysis Unit” (Ludlow, 2014).

Bryn Ludlow is a multimedia artist, and PhD candidate (ABD) in the York and Ryerson Joint Program in Communication and Culture. Her dissertation is about diverse global perspectives on digital stories by youth who have aged-out of foster care in Canada. Bryn is an International Affiliate Member at the Centre for Oral History and Digital Storytelling at Concordia University, Montréal, Quebec.

Partnering with Academia to Meet the Needs of Community-Based Seniors

Reflections on TrentAging 2019 – Take Back Aging – Power, Critique, and Imagination

Celebration of love and growing old in mainstream...