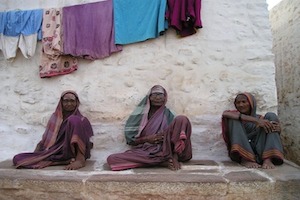 The relationship between social capital and health gains has been well established in the gerontological literature. In particular, indicators of social capital such as trust, networks, neighbourhood cohesion and norms of reciprocity have been shown to be associated with longer life expectancies, reduced rates of non-communicable diseases (Kim, et al 2008), and a reduction in depression and substance abuse problems among older adults (Nyqvist, et al, 2006). More recently, the empirical validity of social capital as a public health maxim has also been examined in non-western settings (Webster, et al 2015; Norstand, & Xu, 2012). In the following, I draw on our research on older adults in urban Ahmedabad (a city in the western state of Gujarat, India) to outline how the idea of social capital as an unambiguous boon may be contested when one examines the experience of aging in context (Samanta & Gangopadhyay, 2016)

Social capital’s intellectual origins can be traced back to the nineteenth century with Durkheim’s (1897) emphasis on group life as an antidote to anomie and suicide, and Marx’s (1894) analysis of class consciousness and solidarity in the industrial proletariat. A more systematic analysis began with Bourdieu (1983) who defined social capital as “the aggregate of the actual or potential resources which are linked to possession of a durable network of more or less institutionalized relationships of mutual acquaintance or recognition” (p. 249). This concept paved the way for Coleman (1988) who examined the role of social capital in the creation of human capital, but rejecting the “extreme individualistic premises that often accompany it” (i.e. orthodox economic theories) (p.S95). Significant to Coleman’s analysis is his acknowledgement of contradictory tensions of social capital through the group enforcement of norms. Specifically, restrictions associated with strongly tied group norms generating a tension between community solidarity and individual freedom. This alternative conceptual recognition of an inherent system of tension and inequality embedded within the idea of social capital had been referred to as the “dark side” of social capital (Putnam, 1995). In our study, we found empirical support to this theoretical claim.

The study was conducted in two elder care institutions (commonly known as “old age homes” in India) in the city of Ahmedabad. In this research, we used a combination of narratives and a semi-structured questionnaire with a total of 15 elderly aged 60 & above (10 women and 5 men). Though family remains the central and often, the most socially desirable site for elderly care in India (Samanta, et al 2015; Sathyanarayana, et. al.2012), there has been a steady rise in the western-style ‘pay and stay’ homes. The city of Ahmedabad is no exception. In addition to collecting socio-demographic information, our interviews focused on understanding the social resources available to the residents and their everyday practices. In particular, we explored the social capital of the residents in terms of ties that they have developed inside the old age home, family support, networks, trust and organizational affiliations.

Overall, findings highlighted the intersecting logics of culture with social capital, age and gender. For example, interviews showed that compared to older men, older women’s pre and post-reproductive lives have remained restricted in terms of access to education, employment and social roles. We noted that despite being bounded by similar life circumstances, fate and shared living in these old age homes, social capital formation (analyzed through trust, ties, interdependence and association) among both older men and women in institutions was incomplete. That is, none of the study participants reported having anyone inside the old age home in whom they could trust or confide. Ten out of fifteen of our participants reported feeling lonely “most of the time”, despite being tied to a shared living of memory, space and time. We interpreted that in a situation where older men and women have accepted the fundamental impermanence of life, investing in collective action and new social relationships might not be automatically produced through of shared living. This finding stands in contrast to the “successful aging” movement which dominates much of the North American ideal of ‘growing old’ (Lamb, 2014), and in particular, the emphasis on self-maintenance, productivity, and the denial of decline and mortality.

Finally, a sharp gender divide in physical mobility was found. In our study older women’s desire to go outside the homes was In particular, the “permission” to go outside the old age homes was reviewed by the management, and approvals were made based on the perceived importance and relevance of the trip. For example, a request for a trip to a local temple had a higher likelihood of being approved than visiting a non-family member. The management personnel asserted that mobility restrictions on women is done ostensibly for “their (i.e. women’s) own good”, thereby constructing older women as helpless victims of age and deficiency. The elderly women, however, remained nonchalant about this gendered arrangement and did not see this as a tool of unnecessary discipline and surveillance. Following Coleman (1988), we interpreted this finding as the bounded solidarity of the collective that is embodied in the idea of social capital, and the subsequently, the enforcement of norms. We noted how a socially entrenched patriarchal structure normalizes social control. These findings offered a realization that the mainstream celebratory views on social capital will most likely generate an ineffective policy tool in the context of growing market-based non-familial elderly care. We contend that delivering effective social policies on aging and caregiving will require a critical understanding of the normative context and accepting the possibility of differing interpretations.

The need for theory and theorizing in gerontology has remained a longstanding concern (Bass, 2013; Bengston, et al, 2009). However, adopting theories and theoretical perspectives to make sense of empirical questions require both imagination and caution. As discussed here, social capital- a recent conceptual import into the discipline of gerontology- raises questions on the crucial role of culture and consequently, alternative meanings that it entails. Unless we critically engage in theory use and strengthen the “narrative’s moment ” (Maines, 1993) of the discipline, the enthusiasm of using social capital in gerontology might end up what Kushner & Sterk (2005) warn in their penetrative commentary- “a theory whose rhetoric is often more liberating than its application”.

Tannistha Samanta is an Assistant Professor in the discipline of Humanities and Social Sciences, Indian Institute of Technology, Gandhinagar (IITGN). Having received her PhD from the department of Sociology at the University of Maryland, College Park, MD, Samanta locates her research that lies at the interdisciplinary crossroads of sociology and gerontology by blending quantitative and interpretive approaches. She examines gerontological questions relating to intergenerational relationships, health, social capital and the role of culture. She has published in top gerontology journals including The Journals of Gerontology, Series B: Social Sciences, Aging & Social Policy and has recently published an edited volume entitled “Cross-cultural and Cross-disciplinary Perspectives in Social Gerontology” (Springer, 2017). Samanta adopts interdisciplinary approaches both in research and pedagogy and teaches a range of courses at IITGN including Demography: theories and social processes, Introduction to Sociology, Global Poverty and Developmental Aid and a graduate level course on Disease, Health and Inequality.

Carers in their neighbourhoods: Exploring the intersections of dementia, care and place

This is remarkably a well-researched piece, grounded on sound theoretical premises. However, the obtrusive method of domination and control by Indian patriarchy is not confined to the older folks alone; it extends its hegemony to all women as such, young and old, lesser the age, greater the surveillance!. So no wonder if women at old age homes are not allowed to move out alone on the flimsy pretext of safety and security!

One word of caution! The number of respondents in the survey is however much too small to warrant a serious conclusion!