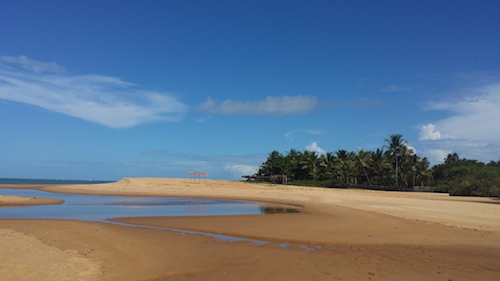 I am writing you this “postcard” from Brazil, where I am currently doing fieldwork (a project on dementia based in Brasília). At just this moment, however, I’m on a one-week holiday, during which I have traveled back to the small village (let’s call it São Jorge), in which, many years ago, I wrote an ethnography for my Master’s thesis at the University of Hamburg. Imagine this postcard showing a beautiful coast, an empty beach, palm trees until the horizon… By the time I began writing my thesis, I had already made many visits to the village; a fact that is important methodologically, because when I kept returning, people (mostly women) told me, “you really seem to like us” and started inviting me into their homes, to chat about their lives, their worries and their happy times.

São Jorge was then an isolated place and the larger cities around it could only be reached by boat or by truck, which in those days very few people owned. I was interested in how people dealt with illness in a place without medical services and where the next hospital or doctor’s office was difficult to reach. Of course, I had envisioned “exotic” healing practices and then reality asserted itself, at least partly: during my first stay I met Dona Angelina, an old woman who lived with her husband in a small house made of clay and wood, with a small iron stove for cooking and almost no furniture, in visible poverty. Dona Angelina was a healer who “prayed” people and incorporated a spirit called Pescoço Grosso (something like “thick neck”) whom she told me I would inherit from her. This was during our last meeting, when Dona Angelina was already at the hospital in the next city, dying of cancer. I still know how to sing the song that is supposed to conjure the entity.

One remarkable aspect of visiting with families in São Jorge was that once I had access to the houses, I was able to admire the improvised altars almost every family owned, generally a small table on which the bible, some statues or pictures of the Virgin Mary and Jesus, as well as other significant objects could be found. To my great astonishment, among the sacred objects medications were often displayed – in many cases tranquilizers. How did these medications get there and why were they displayed on an altar?

Many of the women told me that they were “nervous”, and that medicines like herbs would not provide relief. However, the psychiatric medications that apparently their husbands, brothers or fathers had bought in the nearest city – only few women actually saw a doctor – were considered too strong for the suffering women. They told me that their bodies were too weak for drugs they felt were conceived for strong, rich people. The result of this incorporation of Brazil’s hierarchic society (and linked to the ancient humoral medicine; see Foster 1994) was that the medications were neither taken, nor thrown away – they became an almost-sacred object on an altar. It seemed, medications on altars served a dual function: they transmitted forces through adoration, but were also a visible reminder of a suffering from a situation that was almost impossible to resolve:

São Jorge is located close to a major tourist center in Brazil and was experiencing major changes at that time, although tourism was still not affecting the village directly. Men were free to go to the larger cities to sell their agricultural products, and to visit relatives, doctors, and supermarkets. Men from the village had access to something that could be called ‘modernity’ (Inkeles 1969). Meeting new women in these cities, and finding better job opportunities had led to some men leaving their villages behind, and some abandoned their families; sometimes new women moved into the village. The temptations of ‘modernity’ were a major threat to the women living in the village, since they had to follow a strict moral code that was different from the men’s. While a married woman was considered morally pure as long as she stuck to the house (and worked hard), a single woman always carried the potential stigma of sexual impurity, making abandonment a much-feared stressor in the women’s lives. Caught between the moral requirement to be married and the growing insecurity of marital bonds made unstable by the new possibilities for their lives men found in the surrounding cities, many women in São Jorge were extremely anxious about their lives, which in turn resulted in a search for medical interventions in the form of psychiatric drugs.

These women—the core group on which most of my data was based—were between 22 and 51 years, and they considered themselves to be old. The women referred to themselves as ‘‘not young anymore’’ or stated that ‘‘my youth is over.’’ There was something absolute about the women’s place within the life course: They were neither part of the group of the deeply wrinkled, grey-haired seniors who, unlike what studies from other places had revealed about seniors and benzodiazepines, did not consume these drugs; nor were they part of the ‘younger people,’ who in some cases were the same age as my interviewees (see Leibing & Collin, 2013 for a more detailed report). Being old meant, in most cases, being unhappily married, days of endless and hard work, and having almost no hope that this situation might change.

Now in 2017, when I arrived at the village some days ago, I was struck by the changes that have happened since my last visit. Of course, tourism has arrived at the village, but still only timidly advancing, because of the remote location. However, a street now connects São Jorge to some more well-known tourist spots (and to health facilities in other towns), and the whole village looked more prosperous. Some “gringos” (as all foreigners are called) and people from other places in Brazil have bought land and some of the old houses; the village now has a bakery, small shops, bars, restaurants, and the coming construction of new eco-villages close to the beach, have been announced. But what was most striking was the public visibility of the women. During my earlier stays women were rarely seen outside their houses, except when journeying on foot to visit family, the church or other permitted places, and I remember that some women were not even allowed to go to the local general store, because it was also a bar, and ‘respectable’ women did not frequent the same places as men. Now the one famous restaurant I had already heard of before arriving in São Jorge belonged to a woman (who had arrived from another city in Bahia), the waitresses were all local women who giggled when I asked them whether they remembered Dona Angelina (whose reputation was a matter of some dispute due to her alcohol consumption and the uncanny forces she had at her disposal that might not have conformed to Catholic norms). In a bakery I entered out of curiosity (before that I had spent most of the time in São Jorge eating almost nothing, sick of dried fish cooked in coconut milk), I was attended by a smiling young woman who had grown up in São Jorge, and who was probably a child when I was last there. The owner of the ice cream shop was a woman, and the only hostel belonged to the daughter of the former mayor. What had happened in Sao Jorge that now women were out in public?

Already in those early days when they were still confined to their houses, women engaged in a micro economy like, for example, the production of cheap ice cream (frozen fruit juice in slim plastic sacs) that earned them at least a little extra money. Skills necessary to support tourism – cooking, receiving, hosting, waitressing, washing etc. – traditionally linked to female work, were now much needed for the growing economy of São Jorge and, therefore, provided paths of emancipation. But what does that mean for our idea of aging? It seems that the women continue to work hard, but the unusual category of “being old at middle age” seems to have disappeared. Of course, this needs more in-depth study. My anecdotal observations and some questions in 2017 about medications on an altar do not provide any substantial data. However, my postcard to you shows that aging is seen as a process towards an end, which can also mean ‘the end’ or a lack of perspective in the case of the women in São Jorge. It further shows that in this context, aging transcends chronological years, and that it is not a typical image of aging; rather it reveals that the ‘end’ is near or approaching while still being relatively young. And much of this ‘being old in mid-life’ was linked to oppression, inequality, violence, and missing opportunities. But like old age this was also a biological process – the women were exhausted due to hard work, bad nutrition, and what psychiatrists would call anxiety, and so prematurely aged before their time. In sum, understanding the embodiment of situated aging – the interplay of social, economic, and biological factors – remains a challenge for critical gerontologists. And now back to the beach.

Inkeles, A. – Making men modern: On the causes and consequences of individual change in six developing countries. American Journal of Sociology 75(2):208–225, 1969.

Leibing, A. and J. Collin – The multiple anxieties of getting older: A comparative study of tranquilizers and the ambivalence of effect. Medical Anthropology 5(1): 399-416, 2013.

Annette Leibing is a medical anthropologist (PhD U Hamburg, postdoc McGill U), who had her first academic position at the department of psychiatry (Federal University of Rio de Janeiro), where she founded and directed the CDA, a multidisciplinary center for mental health and aging, with a special focus on dementia. She is now full professor at the Nursing faculty (Université de Montréal), and member of the research groups MéOS (social aspects of medications), CREGÉS (social gerontology), PACTE (politics and health, in Grenoble, France), and PEPAS (subjectivity and health, in Rio de Janeiro). Her research focuses mostly on issues related to aging, by studying diseases such as Alzheimer’s and Parkinson’s, aging and psychiatry, pharmaceuticals, the situatedness of care and, stem cells for the body in decline, among others.