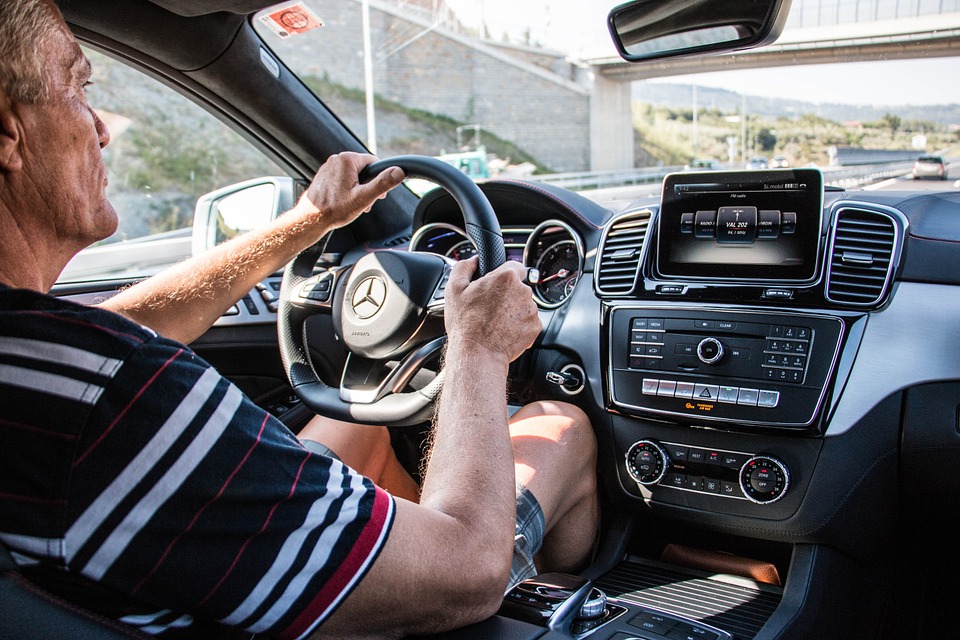 Driving a car is a taken-for-granted activity that many of us do regularly. But what happens when the car you are driving is different in form and function than what you are familiar with? My current research explores this issue, in response to the greying of the driving population and observation that new automobiles are ‘high-tech’. Advanced vehicle technology (AVT) is a catchphrase used to describe the sophisticated computer and electronically-mediated communication systems now available in today’s automobile. AVTs provide assistance with driving-related tasks (e.g., reversing, changing lanes) and ‘warnings’ to prevent crashes. They include technologies such as back-up cameras, blind-spot monitoring, and adaptive cruise control.

After receiving funding from the Social Sciences and Humanities Research Council and the Labarge Optimal Aging Initiative, I began talking and driving with seniors who owned and regularly drove high-tech automobiles. I also started reading the burgeoning AVT marketing and scholarly literature produced by automobile manufacturers, scientists, designers, and gerontologists, to get a sense of how this topic was studied and approached by others. Perhaps unsurprisingly, I realized that AVTs were often studied in ‘real-world’ terms to assess if these technologies actually reduced collisions and whether ‘older bodies’ had the physical and mental constitution to drive ‘safely’ with them. I observed how dominant the assumption is that scientific and technological advancement can enhance older driver comfort, pleasure, and safety, and ‘solve’ the problems, such as age-related impairments, that often occur with aging. As a critical gerontologist and qualitatively minded researcher, I endeavoured to approach the topic differently. I aimed to know how older drivers’ experience, utilize, and ascribe meaning to AVTs in their driving lives. While ‘experts’ and professionals tout AVTs as inherently good, I wanted to know what older drivers themselves have to say about advanced vehicle technologies.

The answers are complicated. Driving, they said, was made “a lot nicer” through the help AVTs provided with complex driving tasks. It made them feel “relaxed,” more “confident,” “in control,” and less “aggravated” when driving. Some driving tasks, they pointed out, such as hooking up a trailer hitch and reversing in a busy parking lot, are tedious, annoying, and stressful to do. However, as I listened more closely, I recognized that the comfort AVTs provide older drivers is not a steady state. AVTs may be ‘friends’ or helpful driving companions, but they are also ‘foes’ that endanger the sensation of feeling comfortable and ‘safe’ when driving. They were “irritated” by technologically-mediated “beeping” and “squawking” perceiving so-called “smart” technologies to be critiquing and challenging their competence and the familiar driving habits they felt to be safe. They were also unsettled by the sensation of technology being in control of driving due to concerns about equipment “reliability” and “dependence” upon technology. Counter to the discursive promises of driving with AVTs, my participants described how driving with technology created an embodied state of vulnerability.

Yet, as Bijker and co-authors point out (2016), feelings of vulnerability are not entirely negative. Vulnerability can generate alertness and awareness about the fragility of technological systems contributing to processes of adaptation and learning about how to cope with the promises and uncertainties of technology. In my research on driving with AVTs, older drivers told me about how they learned to adapt and co-exist with technology. They were open and willing to allow technology to change driving practice, but at the same time, recognized the continuing value of ‘low-tech’ bodily-based habits. They used the experiential state of vulnerability to negotiate a relationship with AVTs. This involved altered practices and an active reflection about whether it was actually safe to hand over control of driving to technology, or better to rely upon pre-existing non-technologically mediated driving skills. They didn’t simply ‘turn off’ or ‘not use’ the technology, but developed an intentional, competent, and meaningful relationship to the technology that involved shifting between ‘high-tech’ and ‘low-tech’ forms of driving to ensure they felt comfortable and safe.

I have wondered many times throughout this project what younger drivers might have to say about a high-tech vehicle. If you learn to back-up using differently coloured lines on a screen and sound cues, does a high-tech vehicle feel uncomfortable and unsafe to you? Older drivers are often positioned as a ‘risk’ to themselves and others when driving, but what possibilities does the older driver-body present? Can young drivers feel vulnerable when driving a ‘high-tech’ car when experience with a ‘low-tech’ car is absent from their driving history? Thus, what can young drivers learn from older drivers about the embodied and felt sensation of vulnerability that might produce better drivers?

As AVTs become increasingly more common, such critical questions require investigation. The challenges and vulnerability that older drivers may feel when driving a high-tech automobile may actually be an opportunity to learn about how people might continue to drive safely. This is especially the case when the unintended effects of using AVTs, such as driver distraction and over-reliance upon technology are uncovered or considered. For more information about why older drivers perceive and experience AVTs to be comfortable and safe, see Gish et al. (in press): http://www.sciencedirect.com/science/article/pii/S0001457516302238

Gish, J., Grenier, A., (Co PIs), Vrkljan, B., & Paez, A. (January 2015-June 2016). Technology for optimal aging: an exploratory study of the effects of automobile innovations on the lived experience of older drivers, their mobility, and social policy. Labarge Optimal Aging Fund. $50,499.

Jessica A. Gish is a researcher and lecturer in the Department of Health, Aging & Society at McMaster University. Her research studies experiences of aging at the intersections of technology, body, aging, and health/illness.