How the Creative Industries Can Positively Impact Ageing and Old Age 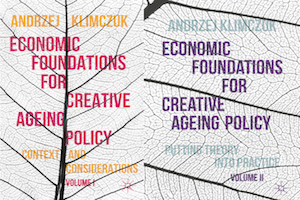 Some people may say that the creative industries have little in common with old age and ageing. Nothing could be more far from the truth, seeing how regardless of age, we all use some form of technology, or have seen content developed in areas such as crafts, design, software, music, publishing, film, and video.

The relationship between the creative industries and old age is ambiguous. On one hand, there are plenty of examples of “worst practices” in the fields of advertising and mass media that repeat negative stereotypes of older people as slower, weaker, outdated, lonely, or poor. On the other hand, there are also “best practices” of products and services in fields such as architecture, consumer electronics, and fashion, often based on the ideas of the “user-centered design” or “universal design.” Such projects tend to involve older adults at all stages of research and development, highlighting positive features of old age such as experience, knowledge, free time, and freedom from work-related duties.

That being said, the designers and marketers may (and some have already done so) wish to reconsider approaches, and provide more or less complex solutions and hacks as part of the response to challenges of the ageing population. Starting from the increase in size of buttons and letters, introducing smart electrical plugs and magnetic fasteners for people living with arthritis, to the service and companion robots or mobile applications with hidden artificial intelligence that may influence physical activity and address loneliness among older people.

However, it is worth examining the creative industries from a distance in order to move away from describing only the positive or negative examples of new goods, trends, or buzzwords. A variety of challenges can be put forward as a basis for rethinking current assumptions and practices:

First, the ageing population, and the development of creative industries are often perceived as an issue that affects only the Global North. Yet, the rapid ageing is also a major challenge for countries of the Global South where creative industries play a crucial factor for the fast growth of local economies.

Second, older adults cannot only be treated as passive consumers by creative industries. Older workers and volunteers are a valuable resource of tacit knowledge and skills for sectors such as the crafts, music, and heritage protection. Yet, the political economy of intellectual property rights may become complicated in the near future where contemporary “producers,” “prosumers,” “freelancers,” or “precarious workers” in the creative economy are concerned. Further questions abound where the “third age” and “fourth age” as stages of the (more and more digital) life course are concerned (e.g., if everyone will be “nudged” to stay healthy, active, and creative).

Third, we should not ignore the importance of the creative industries such as the mass media, cinema, and public cultural institutions for the democratization of access to culture. Such entities are not only represented by the public sector and private sector but also by non-governmental organizations, and non-formal groups and initiatives that are close to civil society, the social and solidarity economy, and local needs of ageing communities. In other words, many older people are already active policy actors who through cultural and creative activities are being empowered.. A number of “new” ageing interest groups include the creative ageing movement, the Men’s Sheds movement, the University of the Third Age movement, the elder cohousing movement, the Elderhostel movement, the senior rights movement, the encore career movement, and the age-friendly movement.

Finally, selected creative industries such as architecture, fashion, software, design, and household goods are very close to the fields described through the concept of the silver economy. Having said that, cautious research in creative sectors could improve our understanding of creative processes related to the ongoing development of the silver markets, the silver brands, the silver industries, the silver cities, and the silver regions.

Andrzej Klimczuk is an Independent Researcher and Social Policy Consultant at the Collegium of Socio-Economics at Warsaw School of Economics, Poland. His research focuses on gerontology, labor economics, public management, and social policy. His most recent publications include Aging in the Social Space (co-authored with Łukasz Tomczyk), Economic Foundations for Creative Ageing Policy (the two-volume set: Vol I and Vol II), and Generations, Intergenerational Relationships, Generational Policy (12 languages edition 2016; edited with K. Lüscher and M. Sanchez).

Update on Summer and Conference Season